With World War II raging, resources of all kinds were scarce. Dried plasma was desperately needed to support the war effort and the community. Despite war-induced shortages, the Shreveport Chamber of Commerce received a U.S. Government High Priority approval rating to obtain the building materials and equipment needed to open a blood center.

The vision of concerned Shreveport area citizens, business leaders and members of the health and medical communities became a reality when our organization was incorporated in 1942 as Shreveport Memorial Blood Bank.

Blood banking was still in its infancy in 1942. With the first blood bank established in Chicago only six years earlier, the idea of citizens donating blood on a regular basis was still a new concept for the nation. The visionaries who created the Shreveport Memorial Blood Bank immediately set out to involve the community in blood donation.

The legacy left by the founders is one of commitment, compassion, and never-ending vision. It is a great privilege and noble responsibility to carry on that legacy. Today, LifeShare Blood Centers provides blood components to medical facilities throughout Louisiana, East Texas, and South Arkansas. Cutting edge work in rare blood trait identification has led to LifeShare’s leadership position in providing rare blood components to patients nationally and internationally.

LifeShare Blood Centers continues its pursuit of excellence to achieve and maintain the highest levels of service to donors and patients alike. The journey has taken LifeShare through many changes over the years, ranging from name changes to reflect growth, to the many technological advances. One thing has remained the same throughout our history – the dependence on generous, caring people to share the Gift of Life. There is still no substitute for human blood. Without the continued support of volunteer blood donors, LifeShare Blood Centers cannot exist.

1976 – Two years prior to legislation requiring labeling as “volunteer” or “paid” donor, the blood center moves to an all-volunteer donor base

Typically, a rare donor is a person whose red blood cells have been tested and found to lack a certain high-incidence antigen or a combination of several more common antigens which together make the blood unique. Certain patients need blood from a rare donor for compatibility because they have produced red cell antibodies and require a more specific match than just A, B or O.

To best meet the needs of patients in our community and abroad, LifeShare Blood Centers regularly screens donated blood for these unique characteristics. Donors of all types are in demand to manage the needs in our area, but they may also be helpful in saving a life hundreds or thousands of miles away. By having a safe and adequate blood supply available to the community, it allows us to screen and save rare blood units for those patients who specifically require them. Blood is an invaluable commodity with limited resources and the supply must be managed carefully. Most patients will not produce red cell antibodies and won’t require the use of specially screened blood. However, all it takes is one patient with a special need to make our rare donor program worthwhile.

ANTIGENS, ANTIBODIES AND THE RARE DONOR PROGRAM
To understand the rare donor program, one must first understand a few basic concepts:

What is an antibody? An antibody is a protein made by the immune system as a result of the body coming into contact with an antigen it does not recognize. When foreign substances enter the body, the immune system may make antibodies to those substances, but it is not guaranteed.

Who needs rare blood? When a patient receives blood, there is a possibility minute differences in the donor blood can result in an immune response by the patient’s immune system, whereby antibodies are produced against those differences (foreign antigens) in an effort to protect the patient from what the body perceives as an invading substance. Individuals, who produce an antibody or antibodies, are called “Responders.” The incidence of “Responders” are generally only about 3% in the general population, so most people are never going to make any antibodies and will not require anything special regarding blood transfusion even if they are found to be negative for a high-incidence antigen.

Some factors can increase the “Responder” incidence. Repeated exposure to different blood cells other than your own (i.e., by transfusion or pregnancy) will increase the chance of antibody production. Patients who are regularly transfused as a part of treatment, thus, repeatedly exposed to many different types of red blood cells, such as Sickle Cell or Thalassemia patients, are more likely to produce antibodies while persons transfused once or twice in a lifetime are not as likely. Sickle Cell Disease in itself is considered a “hyper-immune” condition which also enhances the likelihood of antibody production, in these patients.

In most cases, antibodies produced will result in slight delays regarding transfusion as blood required cannot just be taken off the “shelf” as A, B, O, etc., but must first be screened for one or two common antigens to make sure it will not react with the antibody produced. In rare cases, the antibody a patient produces reacts with almost all donor cells it comes in contact with and only a small percentage of the population (usually less than 1%) will end up being an acceptable transfusion match for the patient. This results from a patient producing multiple antibodies to several common antigens or an antibody to a high incidence antigen.

In years past, the only way to find such rare donors was to take patient serum containing the rare antibody and test it against all possible donor samples and hope for a match. This testing can take hours to complete, is fairly labor intensive and requires a large amount of patient plasma. Today, DNA testing provides a cost-effective complimentary tool for identifying rare donors and one day it may overtake traditional screening as the method of choice for this testing.

Screening for rare donors at LifeShare Blood Centers has been a phenomenal success and major blessing for our community and for many unique patient needs across the country. LifeShare staff have currently screened over 90,000 donors for rare blood types (beyond A, B, and O using both traditional and DNA testing), classifying close to a thousand of those as rare donors.

As a result of this, LifeShare is one of the leading providers of rare blood through a special endeavor named the American Rare Donor Program, which is a collaborative program between the American Red Cross and AABB Immunohematology Reference Laboratories designed to meet the needs of very unique patients throughout the country and occasionally beyond our borders.

Rare blood types exist in every population. To find a matching blood type for a unique patient in need, the best outcomes are nearly always found from a donor within the same ethnic population to which the patient belongs. The LifeShare service area is made up of mostly Caucasian (white) and African-descent (black) individuals. To best serve our communities, LifeShare laboratory staff regularly screen donors for known rarities most common in these populations.

Once donors are found to possess one of these rare types, LifeShare staff can match the donor with specific patients requiring certain types of rare blood. Ten years ago, matched units for many of these patients required national searches and took weeks or months to find the appropriate units, if any were found at all. Currently, LifeShare is able to fill rare unit requests in a matter of days generally, and most often from blood drawn at one of our own collection centers. Additionally, we are able to meet the needs of many exceedingly rare patients across the country due to our screening efforts and the generosity and dedication of the rare donors we have identified.

The LifeShare service area provides care for a number of patients with Sickle Cell Disease. Due to the nature of this disease, matched donor blood is often necessary but difficult to find because of the production of rare or multiple antibody combinations. The treatment for these patients often is based on blood transfusions. Sickle cell patients nearly always require blood that is tested for unique characteristics either to match for antibodies already produced or to reduce the chances of antibody production over their treatment. It is our goal to expand our donor base and continue to identify rare donors to meet the needs of these special patient populations in our communities.

We make it easy for to find the nearest donor centers and mobile drives to you. Click learn more to find a blood drive nearest you. 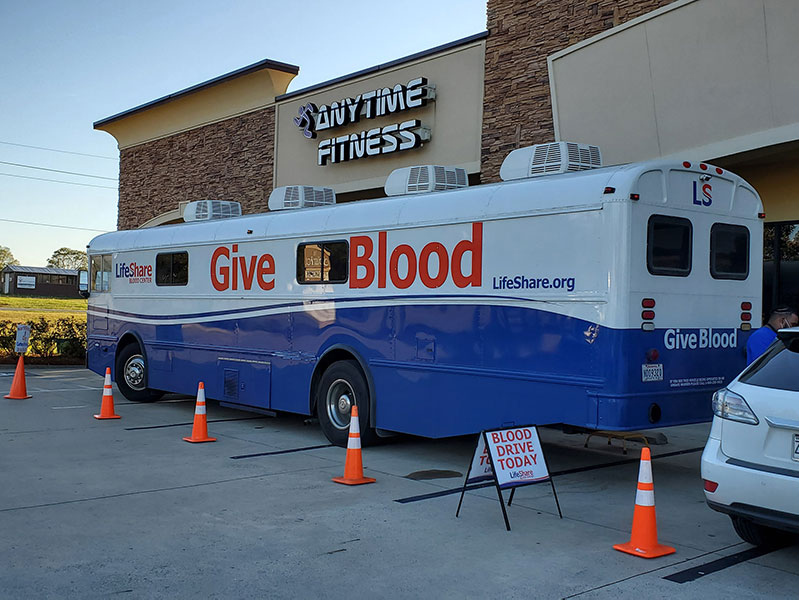